Some shots of some of my fan art

Now before anyone says a word, I’m aware of the not stellar quality of these photos. My camera is just a an old cell phone that no longer is attached to a service and has a usb port, taking proper pictures is difficult at best given it’s screen display issues when the sun is out and finding the right lighting in this house is an ongoing quest. Some day I will be able to get a proper digital camera but until that day comes, meh, this is what I got to use. Some of them I cleaned up in photoshop.

All the pieces in this are several years old. Several. I’m not so very into doing fan art so this is likely going to be the last time I put fan art up. I much prefer creating my own characters, and working on art that is not based on some one else’s. Please note these should fall under fair use as I mostly was doing them to learn how to illustrate and they are just fan art. 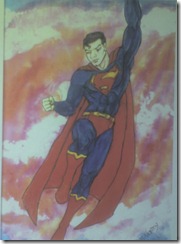 This was 1 of 3 pieces I did for my godson’s 1st birthday, somewhere around 2001 or 2002, the originals were sent to him & his mother (Grasshopper!). Above is Superman done in watercolors and india ink. 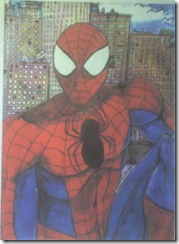 Here’s the second, done with watercolors, india ink and a touch of white out, I also applied some special glow in the dark paint which had a little glitter in it. SpiderMan at the extreme front, on top of one building is Black Cat (her hair was done in white-out) and atop another is the Punisher. Figures can be seen inside several windows on the original as well, and I included a window washer on his rig. 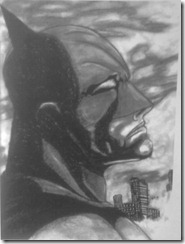 Here’s the third of those for my godson, done in charcoal with a little of that glow in the dark paint applied, Batman. 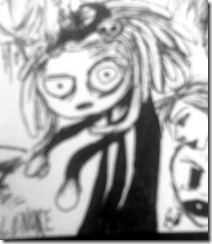 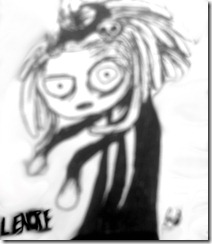 Above is Roman Dirge’s Lenore, in ink, done 2002. The 1st is taken directly from my sketchbook and Jhonen Vasquez’s Happy Noodle Boy can partially be seen next to her. The second image I cleaned up in photoshop, and enhanced the name. 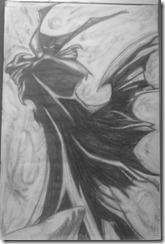 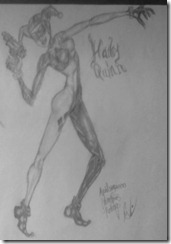 My one playful attempt at Harley Quinn in 2000.

The above is based on Anna from Shaman King in 2004. 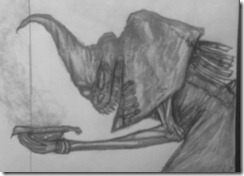 The above was loosely based on a figure in a Brom painting. I want to say 2007.

The above was my first real crack at a manga style drawing, about 1999, based on some random manga character, not real sure who, I am sure some of that is my own embellishments though.

Love making up my own characters way too much to spend much time dabbling around with fan art. Anyhow hope you liked them. I might bother to get higher quality photos out for these but then because they’re fan art, might not.

Who has ever drawn fan art? Did you enjoy that? Who’s your favorite characters to draw? Do you ever make up your own characters? Who among you has big plans for your own illustrated characters?
Posted by Christina Nabity at 6:00 AM

Please explain to me what Fan art is...

I could do more fan art if I had any interest to, but aside from doing them just to learn to draw better I don't really like to do fan art (Obviously that doesn't apply to paid gigs from say a comic book company). I imagine some day people might do fan art of some of my characters, if I get where I wanna go.

:) Thanks, I definitely will keep drawing as often as I can